The Case for the Bad Boy

I have always been that girl who could not resist the bad boy. The truth is, most women can't. All of us have someone, somewhere in our past that didn't respect us and in most cases didn't even really like us that much. And we just COULD NOT get enough of him and his evilness. I know I'm guilty. Several "wish I could forget" times over.

In some cases, they really are just raging assholes lacking sensitivity chips. In others, women don't respect themselves in which case, why should a man? My period of indulgence was most definitely high school -- teenage self-esteem co-mingled with some really (and still) wrong dudes. I don't think there was a single good one in the mix, despite their sheer numbers. This might explain why I went polar opposite in college and dated the Good Guy. For eight years. Because I wanted to marry a guy who I knew genuinely loved me, would never cheat on me, and offer me a lifetime of security.

And then I didn't. Why? Because I wasn't challenged. I'm a handful. I'm highly opinionated, aggressive, driven, and good or bad can only respect people that level with me. Not concede to me. Because I'm not always right and I don't know everything. You just have to remind me sometimes. 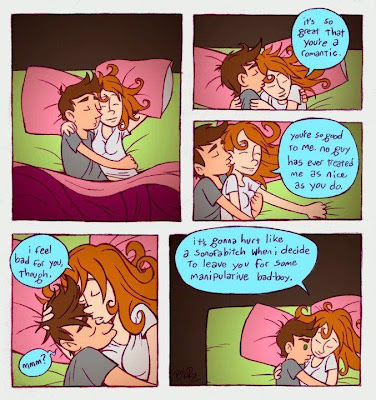 So I married a bad boy. Oh yes I did and I am proud of it. There is no question he has been awarded this status by more former girlfriends and one-night-stands than I care to know about (yet, somehow do). He even started out as my rebound bad boy. And then something happened.

I realized the bad boy isn't really all that bad. Sure, they objectify women and use them as entertainment. Until they find the right one, that is. Once they do, you realize they too are very human and even feel, underneath all of that crazy "I could care less about you" sexiness. And there's a woman for every bad boy, because no guy, I don't care what they tell you, wants to be 45 hitting up 25 year-olds in today's club scene. Trust me. I know a few who still talk a good game but would do anything to be snuggled on the couch watching the Bachelor with their wife. Seriously.

Most bad boys want to be challenged and intrigued by their mate. And most young women don't have a clue. Hence the reason these bad boys are usually the last to marry. But when they do, they redeem themselves and then some. Like my very own husband. Who is likely going to put me in my place for writing this post, but wait Honey! I'm about to say something really awesome.

My husband is the most caring and compassionate yet strong and principled human being I know. He does not let me get away with anything, and I would not have it any other way. At the same time I feel very loved and supported and I question nothing about our commitment to one another. Admittedly it took some time to get here, but once we did the reward significantly outweighed any hardship. Even as a writer I don't think I could ever find sufficient words to describe how much I value him and the life we live together. Every day he positively impacts my world and makes me a better person. Which is more than anyone could ever ask for in a mate.

And he was a bad boy. They make the best husbands. You know, if you marry one, that you were worth changing their ways. Not to mention they come with significantly less ex-baggage than good guys. You are the one, and the only one, because the rest (for the most part) simply didn't matter. Which in turn brings that little ego boost that comes with knowing you snagged one...but you can't let that go to your head. Enjoy it,  privately.

Morale of the story? Don't run away from the bad boys, embrace them, but do so wisely. If the timing's right, they could be the one. Today's asshole could be tomorrow's hero. You just never know.

Born Without a Y
My continued quest for the answers in my early 30's.
Thirty-One Pursuits
My journey through 31, clueless.